To enable high school students to recognise some of the major problems and worries with the media in the era of “post-truth communication” and to recognise the various ways that the media can slant how we see an event or a narrative, Swadeshabhimani Media Study Centre of Vakkom Moulavi Foundation Trust organised a one-day workshop for the students of Eduspot Perumathura on 31st December 2022. 45 students and 5 volunteers attended the workshop.

The workshop was designed to help them become judicious media users, both as consumers as well as content creators. Anu Antony, programme coordinator of Swadeshabhimani Media Study Centre served as the facilitator. The first session entitled “What is media literacy and why we do we need it” started with a few questions such as:  what is media? What different forms of media did you access during the day, how much time do you invest on each media, and so on. Following an active discussion, students were divided into four groups; each is assigned a medium named-Newspapers, Television, Radio and social media (FB, Twitter, WhatsApp, Insta). Each group was asked to discuss the kind of “news” information they receive from their assigned medium and the strengths of their medium. After that each group presented arguments to justify why their medium is better than other mediums to receive news information. The facilitator outlined the various features of each kind of media (based on broad categorisation) and illustrated the various tools – visual, verbal, aural, interactive – available with each media to construct their messages. The facilitator explained the definition of Media Literacy, how messages are constructed across different media so we can use these media to our greatest advantage. Students completed a media usage survey to self-assess the time they spend on different media.

VMFT Vice Chairperson Dr. Sajitha Bashir led the second session, entitled “Where is Facebook?”. She began by introducing VMFT, SMSC and  Vakkom Moulavis’s 150th birth anniversary. She emphasised the significance of media literacy for students. This session also started with few questions like – What other social media does Facebook own? How many people actively used Facebook “Family” in 2021? How many photos are shared on Facebook every day?  After understanding the scope and size of the social media giant, the facilitator distributed a table for students to fill, which indicated the number of posts, and images students are sharing or forwarding in various social media every week.  Dr. Sajitha led a discussion focusing on who owns this data, how Facebook uses the data and where it is stored. The concept of meta data was explained and that even if an account is deleted, images and texts shared with other people can remain permanently on the social media.  Further, meta data can be used to create profiles of individuals, which are used for advertising, politics and other purposes.

After the lunch break students had the final session titled What is the message? How aware are you? SMSC Programme coordinator Anu Started with asking Questions to students like- Did you believe all the information you received through media were true? How did you know they were true/false? Is all news and information on the Internet true? Why or why not? Who gets to post news items online? How can you avert fake news in your community? After getting responses from students Anu explained how messages are created and the possibility of getting fake news or misinformation. She coined a few examples from recent times to make the students clearer about the fake news spread and misinformation. She also clarified how messages could be distorted by playing a Chinese whisper game. After collecting feedback forms, the workshop ended at 4 pm. 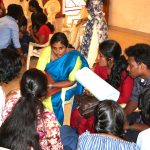